The collection at the Ethnological Museum, Montjuic, Barcelona

On entering the basement of the museum, it’s like a store room with glass covered shelves upon high shelves of every sort of artefact collected from around the world, including some extremely finely carved bone, wood, rose quartz and tons of ceramics. These little painted wooden panels called Ex-Voto (meaning vow made) stole my attention immediately! 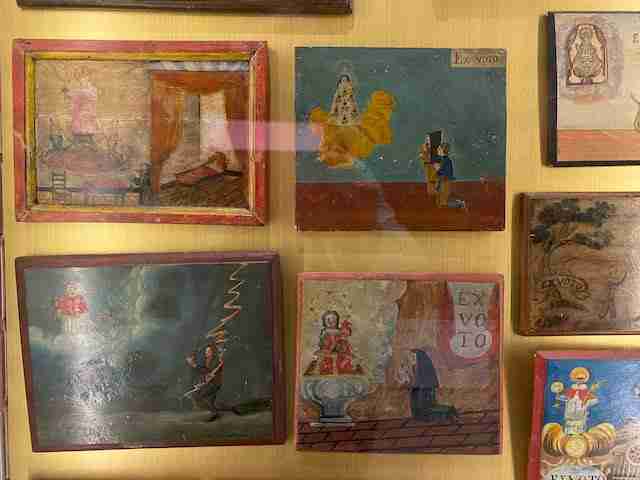 The history of Ex-Voto paintings

Ex-Voto’s are generally Christian folk art from the middle ages, found in rural areas. They represent an offering for a promise kept to a saint, for the fulfilment of a prayer – after the person became well again. Numerous Ex-Votos accumulate in the churches and shrines, spreading over the walls around the preferred saint. They act as an endorsement to the saints power to heal and perform miracles. They originate in the pagan tradition and were banned by the Catholic church in the 6th century for fear they established a direct communication between the human and divine being, without the need for an intermediary of the priest. Christianity eventually assimilated this popular practice of votive offerings during the middle ages. 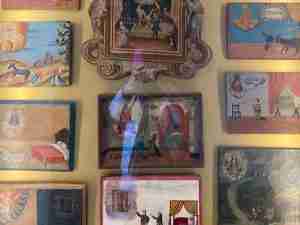 An Ex-Voto tells an intimate narrative of suffering and devotion. They depict the chosen saint floating above, while the ailing lie in their beds. I like that you can work out what caused the suffering, because the reason is often included in the composition, such a being run over by a donkey or being struck by lightening or having a disease. Sometimes there are extra words or shiny new limbs painted. 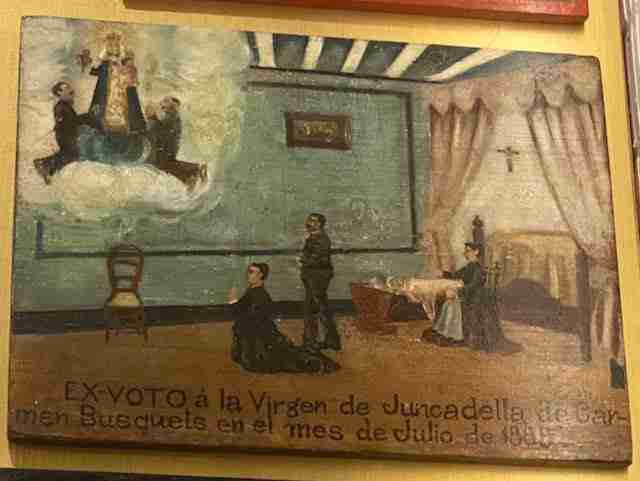 Artists were sometimes commissioned by the more well off, though usually the Ex-Voto was rendered by the devotees themselves. They offer a glimpse through a window into a bygone time, you can see details of transport, war, medical treatments, tools, furniture and clothing. On observing the details of the interior of the bedrooms – most of the people have four poster beds! Imagine the wife of the man vomiting blood, how she must have felt when painting the scene below to the Virgin Mary. 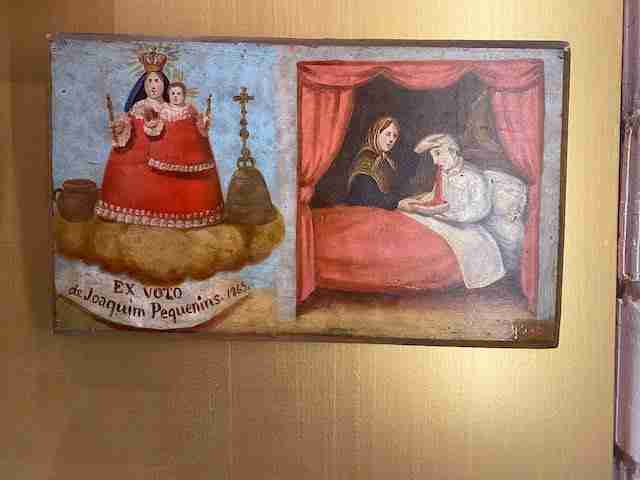 An insight into Frida Kahlo’s painting

Ex-Votos are numerous and even though I’ve never seen anything like them, they are evocative of Frida Khalo’s paintings – the way she depicts her own suffering in graphic detail.

On further Googling, I found Mexican Votive art. The practise spread to rural areas of Mexico (from Spain) during the 16th century and had a couple of renaissances in the early 19th and 20th centuries.

Frida collected Ex-Votos and adopted this style of folk art (incorporating her own surrealism and personal anguish) to rebel against the academic norms of the time. This knowledge is available and delivered by way of a carefully curated exhibition of Frida’s belongings. It feels exciting to have drawn the same conclusions as the museums by discovering this connection myself. Now Frida’s art makes even more sense to me!

I can’t help but imagine myself being an Ex-Voto painter, so please get in touch if you would like to commission me to embody your woes and wishes into a painting – as an offering to the Gods!

Please also take the time to browse the art I make on this website!