The Making of “The End” Painting

Read on if you would like to know the story behind this oil painting – it’s development and what was going on in my mind while I painted it. It was a bit of a journey, for instance, I had the urge to paint something big but I didn’t know what.

One evening I saw an epic sunset and was determined to try and paint the peachy reflections on the pale turquoise sea. I had also been inspired to paint some bathers, after seeing a painting of a female bather from the 1950’s, in a gallery in Malaga. I had already located an old photo of some good women friends, that I took on a beach a few years ago. The reason I took the photo is that I liked their strong stance. 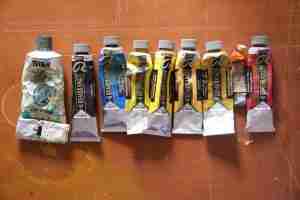 Trying to match the colours in my mind

Mixing up the hues was hard because whatever I had in my jar or palette looked different once it was laid on the canvas. The bright ideas of my mind sunk into a dull matt finish on the canvas. In the end, I got the hang of mixing up darker and stronger shades though, knowing they would subdue. However, I also liked the subdued shades and carried on mixing them and building them up as well. I used a limited palette of oil paints – black, white, cobalt blue, cadmium lemon yellow, cadmium yellow medium, light gold, transparent green-yellow, orange and a rose red. 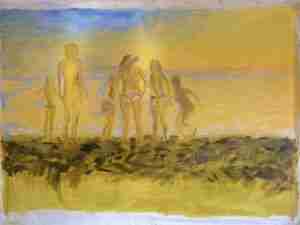 After a few painting sessions, I came to the conclusion that I’m not a painter – I was crying out in frustration like a child who wants something different from what they’ve got. In my eyes, I just couldn’t do this painting any justice though. I just couldn’t paint it in the style of the art I like. I had to break my original idea up and stitch it back together another way – by drawing upon what has worked before, by breaking some of my self inflicted rules, by admitting I’m rubbish and I can’t paint and yet keeping at it anyway. I had to let go completely and just value my style that comes out on its own. I hadn’t realised that I hadn’t been valuing my own style up to that point. Then I just went for it. 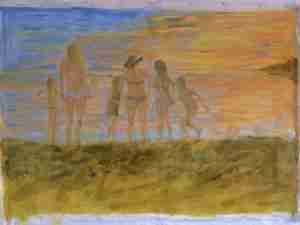 The painting also has a more sinister overtone, as the painting’s lettering was inspired by working towards an exhibition about climate change, about the possibility of human extinction. At first, I thought The End would make a good title for the piece, then I decided it would be even better to embed the title directly into the painting. It took some confidence to commit to taking the painting in a whole new direction, by adding the words. They immediately opened the painting up to be a story, The End of something, but we don’t know what though.