This is a semi-erotic art film with spoken word poetry. It is designed to be projected live, on a nude body. You can purchase the film or even book the whole live video installation. The film is called The Water Deity because it is about the female body immersed in water. The content of the film involves a beautiful woman swimming freely – she’s naked and has a long red piece of silky fabric that she interacts with. I felt the film needed something else, so I projected the original film onto a woman’s back. The film now hugs the curves of a 2nd nude, which brings another dimension, while obscuring the swimmer’s nudity slightly. The film is a full HD loop of 3-minutes duration. Sometimes it’s the nude’s back that is visible and sometimes it’s the nude swimmer. 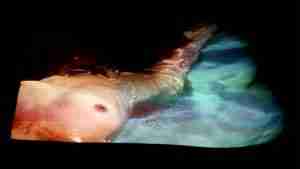 The film starts off with an angel – the suntanned model calmly floats in a bright blue swimming pool, which strongly contrasts with the vivid blood-red colour of the fabric. To begin with, your attention is only brought from the swimmer when there is some minimal movement from the female back, which is like the canvas in the foreground. The back is wet and glistens in the light of the projector. 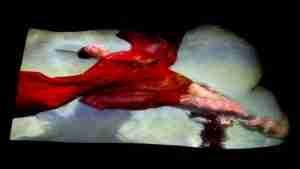 As the swimmer begins to move – her slender limbs and the swirling fabric become quite abstract for a while. She starts to dive backward and her pubic hair is revealed and then it all becomes filmed underwater. She swims around, submerged for a few minutes like she doesn’t need air. 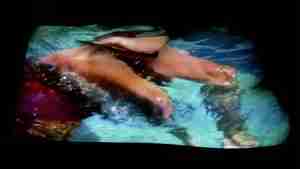 When the swimmer unashamedly flashes her vulva, you don’t actually get to see any real detail, just the raw suggestion. The words being spoken at the time her vulva is on screen are, “Her sensuality is shocking and loud.”

In the gallery setting, you have to get close to the TV speakers to hear the poem properly. My voice over recording comes across as hypnotic and a bit husky because I had a cold when I recorded it. My voice drones on in the background atmospherically. Here is the whole poem:

Water Deity
She is in her flow, just being,
sometimes busy, sometimes still.
She is a close friend, one that you can depend upon.
Ask her what type of help she needs?
Ask her what she thinks you need?

Appreciate her, cherish her, make her feel safe and secure
and she will nourish you, admire you,
she will put into you, in ways you didn’t know you needed.
Holding you in her heart, listening to you and singing your praises.

She’s on your side
She loves and values you
she empowers you and then lets you go.
She loses all control, floats free, in a trance, uncertain, hoping,
overcoming and moving forward consistently, persistently.
She has faith in life.

The depth of her wisdom is unbound, ancient knowledge flows through her
Her mind is open – dangerously so
and she knows it doesn’t matter if she likes or dislikes something.
She lets dramas unfold without interference.
She takes her satisfaction from calm.
She observes her emotions – even entering into them.
Her self discipline and integrity are catchy.
She’ll inspire you, help you find your inner motivation.

She’ll play, dance and steal the night – facing the moon as she does the sun each day – straight, centred and certain of her complexity.
She is accustomed to many different ways of living.
Her standards are high.
She takes good care of herself and she’ll take good care of you too.
Endless energy requires relaxation, downtime, rest, closing the hatches and dying – making space for the new.

She indulges in solitude.
She is not chaste.
Her sensuality is shocking and loud.
She chooses with whom, when and where.
She births free from interventions.
She is capable, she is powerful, she is sexy.
She is time and space – the source of your own life.
She is a Goddess, heavily disguised as an ordinary woman. 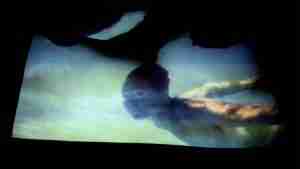 You can purchase this film

The film is not available to see online because it is intended to be viewed either on a big screen or even better, having the experience of seeing the film projected live on a nude figure – this is when the magic of the film really blows the lid off!

You can soon purchase a copy of the film as an instant download. A link will appear this week!

You will receive a folder with the complete film (ready to play on a screen with the swimmer projected on a nude back and with the spoken word soundtrack). Also included is a separate file of the soundtrack and most importantly the raw film of the nude swimmer for you to project yourself. 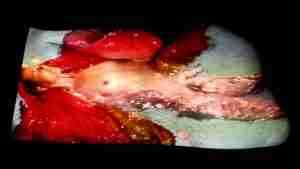 An audience is invited to observe the magic of the swimmer posing nude in the dark, with the film projected directly on her, in a real-life art installation with the spoken word. Contact me for a quote, if you wish to book the live intimate experience –  this live art piece is mobile and can be exhibited in a suitable venue near you.