What is Egyptian Faience?

It’s a paste made of mostly powdered quartz, that when fired, looks like the semi precious stone, turquoise. However, using the stuff is like sculpting with toothpaste. I gave some to a creative friend and she just threw it back at me, saying, “I can’t be doing with that”. I have managed to find a way of pushing it into shape without using a form. I work quite wet and fast with it. It needs a good mixing each time I work with it, though the more it gets kneaded the more sloppy it gets. It doesn’t hold it’s shape at all, so working with it is an acquired taste. 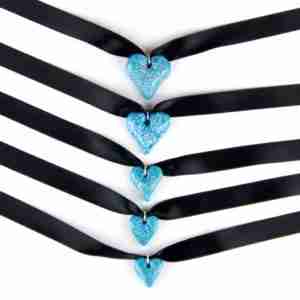 Is it’s more common name. It was first put into production by the ancient Egyptians more than 6000 years ago and was popular because it mimics the semi precious stones. The turquoise colour is achieved by adding copper carbonate. It does not require glazing because when a piece dries out, the sodium bicarbonate salts rise to the surface and become the glaze. It is fired to 960 degrees. I did experiment with firings, over 1000° and it melts and any lower and it looks undercooked. It is very hard wearing. I dropped a piece twice when I was cleaning off any sharp edges and it didn’t break. I also tried drilling a piece and it broke the drill bit. It’s kind of more like glass than clay. 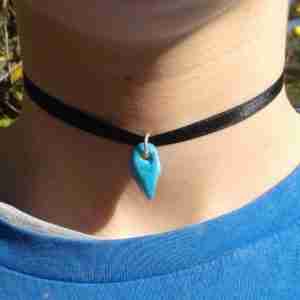 The pendants have a solid silver link and look nice on various width ribbon for a feminine touch and on cord for a more masculine feel. Check out the several different style pendants you can buy on this site.