This zen meditation sculpture is called Serene Meditation and this is the story of how it came into being.

Zen and the art of working in clay

This zen meditation sculpture was a bit of an adventure in the making, because for some reason I decided to overcome all obstacles in my way… regardless how futile it seemed at times.

She started life off as a simple kneeling figure, surviving the first biscuit firing nicely. However, after the high-temperature stoneware glaze firing, I found her fused to the kiln shelf by a sculpture that had literally melted into a pool around her. Without a second thought, I got to work with my hammer and chisel, and painstakingly tried to free her from her restrains. I had not expected her to survive that stage because I had to hit it really hard and loud (as my classmates will testify).

Thankfully just a few small uneven bits were left underneath, which I smoothed off with a Dremel (a power tool for detailed DIY) but I was not entirely satisfied with the result. Oh, and I forgot to mention: both her feet had broken clean off!

Zen meditation sculpture gets a bowl

Undeterred, I decided she needed something to sit in to hide these minor flaws. I made a few bowl designs, but none suited her style. The lotus flower design was calling, but I tried to deny it – because I didn’t feel like making anything so predictable and spiritual. Eventually, I had to concede and devote a stupid amount of time to sculpting and glazing each row of petals (that was another whole meditation in itself).

I had no expectations at all by this time, and put her in for a second high temperature firing, with chunks of turquoise glass loosely placed in the bowl… which, mercifully, this time fused her feet back on, and restrained her nicely into a new pretty pool of crackled glass.

The journey of this stoneware zen meditation sculpture coming into being was much longer than anticipated, but I’m glad I persevered. 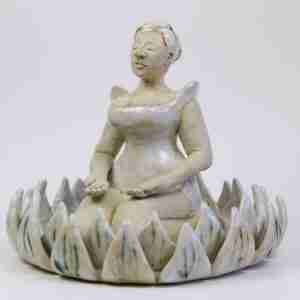 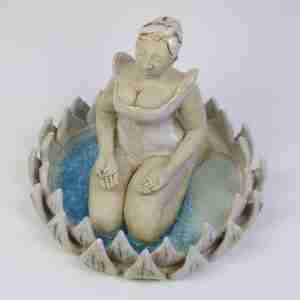 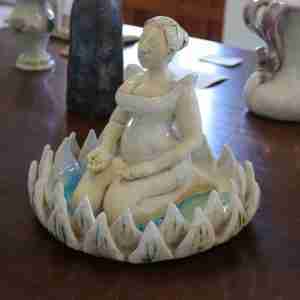