I was commissioned by Joanna Duchesne, Managing Director at The Service Co-op to illustrate this animation for the Miscarriage Association, for baby loss awareness week. Firstly I created the look with pen and ink drawings over watercolour backgrounds. I then developed the story board alongside the client. Joanna produced the film and Amy Swales did the believable voice over. 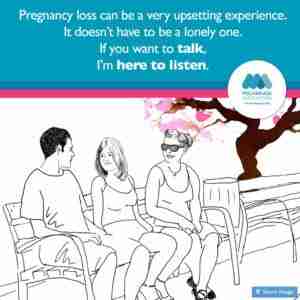 To give the piece some realistic movement, I used stop frame animation, which meant creating a video shoot with the couple and drawing every 4th frame from that video. I didn’t have the budget or time to set up all the details of every scene for the video, so for example in the clinic scene, I filmed the lady laying on a bench and her boyfriend sitting on the floor beside her, all on my friends roof terrace. I then, later on, drew a hospital bed around her, added the ultrasound machine and montaged in drawings of the nurse, who is my nurse friend, who posed for me over Skype in her work uniform on. Also, that’s a sketch of my old teddy bear that appears in one of the thought bubbles.

I ended up doing about 20 drawings for each major piece of action. I sent off, high resolution, photoshop files, with each motion frame in a different layer. Dominic Faraway gave the film all that sublime animation.

I appear in the film, as the friend at the end in the park scene, pictured above.