An animation by Emma Plunkett and Louise Stevens for ICS (International Citizens Services, UK). ICS is a youth volunteering programme run by VSO (Voluntary Services Overseas) with many partners. The film was published on Facebook for International Volunteers Day on the 5th December. It will also be shown to illustrate to the volunteers that their work is worth while, even though they sometimes do not get to see the rewards straight away. This project was a fast turn around and was published within a month of the initial pitch for the job. You can also see the previous animation project that I did for the The Service, which was for Baby Loss Awareness Week. 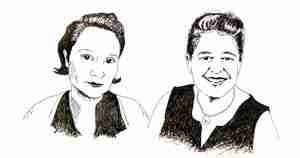 Creative Director Louise Stevens enrolled me into her film making cooperative, The Service, in London, a few years ago. We have a long friendship and a successful and enjoyable history of working together on various creative projects. On this project we were working alongside the great team at VSO & ICS, Jack Howson, Meryl Westlake and Nick Adie. We used Google Drawings to communicate online with each other about the development of the script and storyboard, each of us working from our different offices. Louise filmed Amina Abdirashid doing the narration, which is a folk story shared by Ingrid Johnson. Amina plays herself at the end of the animation. My friend Paul plays the grandfather and Umi Lowsley-Takahashi-Williams plays the cute child Amina. The location and props were provided by my friend Angie who also plays the adult Amina in the distant shots. The other parts were played by people who were roped in because they happen to be nearby. 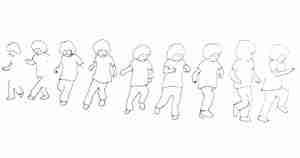 The ICS team refined the script with Louise and I then interpreted it into a visual storyboard. Louise defined the characters, what they would look like and wear, and I then drew them and their backgrounds, roughly in pen at first, then I coloured them on the computer. I needed to make sure the whole team could see, near enough, how each scene would look like, what movements would be happening and where the lettering would be placed. All feedback needed to take place before I came to cast some actors to play the parts of the characters. I use the video as reference material to draw from. The film came together from hundreds of pen drawings. Each character traced individually from the video, photographed and then manipulated on the computer, layer by layer, cell by cell, 6 frames per second. Louise communicated with the team, came up with the idea for the typeface changing heights, she sourced the audio and directed each scene as it became animated – timing, audio levels and fine tuning the actions. 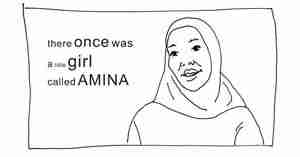 The film is set in a generic rural African location. Amina, pictured, is from Kenya and wears a hijab. It was decided the story would be based on her real character and a drawing of her would appear at the end lip syncing the words. I watched video tutorials on how to put on a hijab and wore one myself for the first time while out walking the dogs, in my wellies, one rainy evening. I did this to make sure I could make one secure enough for filming outside in the wind. I felt like I was brandishing a symbol of organised religious beliefs and yet I somehow felt that symbol meant I was safe and could not be judged on whether I was a sexual object or not. The hijab, for me, meant that I was liberated from playing any sexual currency game. 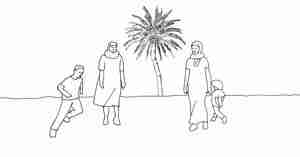 The penultimate scene of the children running round their mothers was super complicated to do and I left that till last. I had two choices of how to create that scene and I decided to choose the more intricate version rather than just having them standing in a line with their arms raising upwards. Even once I had started animating, I had no idea how I would pull off getting the children to run in a complete circle behind the adults. As I got nearer that point though, I managed to devise a away, which if it hadn’t worked, that choice would have been a whole days animating out the window. I had no reference material to work from because what I’d filmed of the children running behind the adults was blurred. To overcome this challenge, I worked on each child as a separate layer, shrunk the children to make them look further away and I flipped them, so they would face the other direction. I then placed them to make them look like they were running in the distance behind the adults. Phew! It worked and I felt satisfied with my risk taking.