This film has been virally successful with over 200k views within the first 24 hours.

In recent months it might have seemed like women’s rights have been under attack. But when Restless Development volunteer Anisa Nur spent time in South Africa last year on her ICS placement, she saw the power that collective action can have in creating change.

She was inspired to put this emotion into poetry and published a series of six brilliant poems from her placement. Her writing was loved so much, she was commissioned to write a poem specially for International Women’s Day – which I was then asked to animate.

The poem in full

Hell hath no fury like a woman who has to March.
Sexism, racism
Every “ism” that endangers a life
serves as a shrapnel in the sides of our great countries,
our righteous societies,
our honourable traditions.
May we use the holes it creates to allow in blooming light
To valiantly fight and decree we will not exchange our rights for your comfort.
We are pledging allegiance to the broken.
The damned.
The covered and the naked.
We hold infinite love that transcends the words weak, meek and frail.
May your walks of shame be strides with heads high.
Change emblazoned on their chests, daring to stand on the right side of history.
No human is born illegal
A refugee
Their worlds fractured by bombs
Disturbed by destruction
Choosing to die on land or join the cemetery in the sea.
Fortune does not favour the aloof
It does not favour the apathetic
The ones who lead in fear aren’t interested in the prospect of peace.
The ones who plot in the dark
Have underestimated the light.
We will show you courage, bravery,
The kind of empowerment that starts from the soles of the feet.
For the many who raise their fists against the corrupt few.
The kind that carries in the voices of the women who are no longer asleep.
Join us.

I was commissioned by The Service, a London based production company who make social impact films within the arts, charity and education sector. They are a cooperative and I am a regular collaborator and friend. They produced the film for ICS (International Citizen Service) and VSO (Voluntary Services Overseas).

VSO is the world’s leading international development charity that works through volunteers to fight poverty in developing countries.

ICS offers a once-in-a-lifetime opportunity for 18 – 25 year olds to work as a volunteer on a development programme overseas.

The team were focused. They chose really strong colours, typeface and music. They provided all the video reference material that I needed for the lip-syncing parts and they also gave good timely feedback and support.

The Service asked me if I was interested in illustrating a poem by ICS volunteer Anisa Nur. I would have to devise the storyboard, animate and edit it in time for International Women’s Day. That was less than two weeks away!

The thing is, I was so inspired by the powerful words of the poem, that I decided to do it, even though time was short. So I put my life on hold and packed nearly two weeks worth of work into one.

I’m glad I did the film because it has been a huge success, bringing lots of awareness to ICS. They had 42,000 views on their Facebook page and the film also had 171,000 views within the first 24hrs on the Upworthy Facebook page (a media / news company – content aggregator that draw massive amounts of attention to stories that matter). 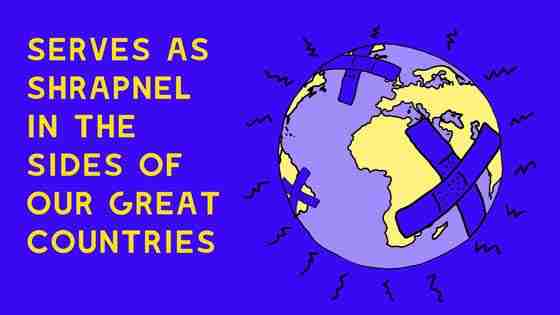 I found the poem very inspiring to draw. These are my favourite lines from the poem, though they are also the lines that I found most challenging to do justice to.

“Sexism, racism. Every “ism” that endangers a life serves as a shrapnel in the sides of our great countries”

I tried to represent every type of woman imaginable throughout the animation, though some scenes didn’t make it past the cutting room floor.

The Women’s Public Service Announcement shows the power of women uniting together. Watch it now.